A gokart race/competition for everyone.

When you want to take your knowledge to the next level.

The idea of the open race is that EVERYONE should be able to compeat for fun. You don’t have to be a professional to participate. The competition is of a relaxed nature as EVERYONE is here to have fun.

Considerate drivers are welcome, the other kind is probably welcome elsewhere.

The competitions are run on predetermined Mondays which you will find below.

We go through all the rules and the arranements, if you have any questions just ask.

You have 6 practice laps to get a feeling of the track and kart. The lap times are not included in the race itself.

Joint start, first to cross the finishline after 18 laps wins! You have 12 laps to drive 2 alternative tracks (extra long laps) which are implimented to get some distance between the drivers as well as options. The remaining laps are run as usual. If you miss the alternative tracks, you end up last in your final group.

Medals are awarded to the winners on the podium and a photo of all competitors is taken. 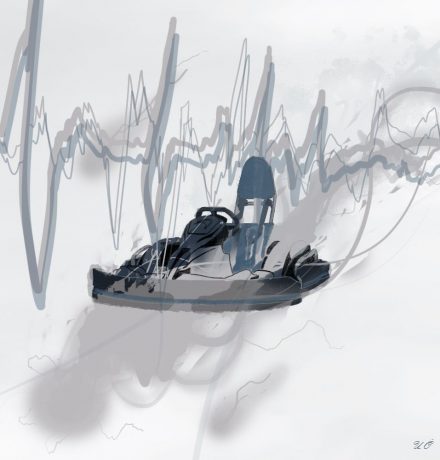 At each completed race, you get points based on your position, for example: 1st place = 25 points, 2nd place = 24 points, 5th place = 20 points, 15th place = 10 points etc. Pole position and win in all finals except A-final gives an additional 1 point.
Participation gives at least 1 point in each competition. It is important to collect as many points as possible. Prizes will be awarded after the last opening competition of the year.

You can read the rules here.

Training 6 laps, qualifier 8 laps, final 18 laps. Open race has no age restriction.
In the finals, the driver who starts last, choose kart line and kart.
Previus race top 3 drivers, practice and qualify in heat 1.
All participants get points: 25p for winning 24p for 2nd place, etc., everyone gets at least 1p.
Pole position and win in all finals except A-final gives an additional 1p.

You race as is, no weights on person or kart.

Green Light (start light): Hands on the steering wheel and feet on the pedals.
Yellow flashing light: Obstacle on the track. Overtaking is prohibited. Pass the obstacle (person that is stuck) at reduced speed and at least one meter away. Stuck/reversing driver always have to give way.
Red light: Slow down and park by the bridge. The loop for timing, ie the finish line, is below the projector screens.

A blue-flagged driver must immediately release the throttle, drive outer-track and allow one kart to pass. During training and qualifiers, blue flags are given directly to caught drivers. In the final, blue flags will be awarded at the second flag post pass. If the flagged driver does not pull away, the blue flag is returned at the second flag entry pass. In the event of a queue (three to four drivers in a row), blue flags are only given to the driver at the front. Lapped driver receive blue flag immediately.

When there are 3 laps left (ex 15 of 18) in the final, only lapped drivers are blue flagged.

10 second stop at the podium. A black flag is handed out if a driver, for example, hits or pushes another driver (ALL forms of contact must be avoided). Same goes for, if a driver does not respect the yellow light, blue flag, makes a so-called brake stop or has a high speed on the straight at a red light. Everyone can make mistakes, if the mistake has negative consequences for a competitor, it will be black flagged. Drivers behind always have a duty to give way. You are behind until you are alongside the other driver. The race manager usually judge based on the situation of the driver in front.

Run the joker lap twice during the final, not on lap 1.
Drive both joker laps before you have started lap 15.
The person driving the joker line must give way 100% and not in any way disturb drivers who do NOT drive the joker line

A kart is replaced if it has an obvious error or if the race manager believes that the kart performs differently. If you are not happy with the kart, talk to those who drive the same kart about changing it. The kart will be replaced if the majority wishes it. If possible. No driver-determined kart change after qualifying start. If the kart breaks during a qualifier or final, it will be replaced. If the kart breaks when there are 3 laps left of the final, the driver retains his position.

Avoid talking to the person responsible for handing out flag signals during the finals. “Quarterly conversations” regarding judgments are taken after the award ceremony.

We welcome suggestions on how our gokart race can be improved.
Do not hesitate to ask if there is something you think is strange or don’t understand.
After the award ceremony, a group photo is taken and posted on the website. So feel free to stay the whole race.

Have FUN and remember it's not the world championship:)

You can find out more about which cookies we are using or switch them off in settings.

This website uses cookies so that we can provide you with the best user experience possible. Cookie information is stored in your browser and performs functions such as recognising you when you return to our website and helping our team to understand which sections of the website you find most interesting and useful.

Strictly Necessary Cookie should be enabled at all times so that we can save your preferences for cookie settings.

If you disable this cookie, we will not be able to save your preferences. This means that every time you visit this website you will need to enable or disable cookies again.